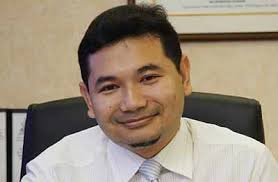 KUALA LUMPUR, Oct 13 – PKR vice-president and secretary-general Rafizi Ramli has slammed Prime Minister Datuk Seri Najib Razak for suggesting that the introduction of Capital Gains Tax (CGT) in Malaysia could undermine the country’s capital market and its stock exchange. In a joint statement with PKR’s Commerce and Industries Bureau chief Wong Chen today, Rafizi said that Najib’s suggestion was an attempt to confuse the people with the hope they did not have a firm grip on the subject of taxation and would easily believe him.

Therefore, he said making the CGT target of only the rich was much more moral and fair against the upcoming Goods and Services Tax (GST) which is imposed on all citizens instead. Citing the statistics on the ownership of financial assets disclosed by Muhamad Abdul Khalid in his book The Colour of Inequality: Ethnicity, Class, Income and Wealth in Malaysia, the newly-minted PKR secretary-general claimed that it revealed how only a handful of Malaysians who could afford to own financial assets.

“Firstly more than 53% of Malaysians do not have any financial assets while the richest amounting to 10% control 77% of the total financial assets in this country. and that 80% of low-income Malaysians have only 5.5% of financial assets,” Rafizi said. Therefore, the Pandan MP said, with the implementation of CGT, Malaysia would be able to collect RM3 billion in taxes in the first year, which is estimated to effect 10% to 15% of Malaysians who will bear the tax.

“This is much more fair compared to the GST, which lead all Malaysians to bear the tax  burden  regardless of background and income,” he said. Rafizi said the allegations by Najib that the implementation of CGT will undermine the country’s stock market and capital were also unfounded as countries that have the most dynamic stock market and have become financial centres of the world all implement CGT.

“The implementation of CGT in the United States, United Kingdom, Germany, Japan and other developed countries did not see the collapse of the capital markets in these countries. “Instead most of the income of these countries contributed by the CGT,” he said. Rafizi added that even with Malaysia not implementing CGT, the country still struggles with the high capital outflows as reported by Global Financial Integrity (GFI), as it had clearly indicated that the high capital outflow was due to illegal activities, corruption and trading practices done outside the law.