GEORGE TOWN, Aug 29 – Chin Khoon Sing funeral which happen this morning 10:00am and leaves for the Batu Gantong Hokkien Cemetery and Cremato­rium. She was on her way to visit her family in Klang after work when she was killed by a hook that fell from a crane and hit her car at Jalan Raja Chulan in Kuala Lumpur last Thursday. Her life was snuffed out a week before her 24th birthday.

Family members, relatives and friends had gathered at the parlour as early as 8am to pay their last respects to the 23-year-old at the Lebuh Noordin flats, amid chanting led by a Buddhist priest. The deceased’s parents, Chin Chee Weng and Yeoh Ang Hooi, her brothers Khoon Ying, 26, and Khoon Feng, 11, broke into tears at the service held in accordance with Buddhist rites.

At about 10.30am, the hearse left for the Batu Gantong crematorium under the cloudless skies. A prayer service was held before the body was cremated. They walked behind the hearse for about 800 meters, passing through Lebuh Noordin, Jalan C.Y. Choy before stopping at Jalan Magazine.

A final round funeral rites were performed before the casket was pushed into the incinerator. When met later, a distraught Khoon Ying said the family will discuss whether to pursue legal action for negligence over the death of his sister. He said they will come to a collective decision soon.

In the tragedy, Khoon Sing was driving along Jalan Raja Chulan when a crane hook from on top a building fell and hit on her car, killing her instantly. Police have established an element of negligence behind the incident, and is set to act against the crane operator for causing death by negligence under Section 304(a) of the Penal Code. 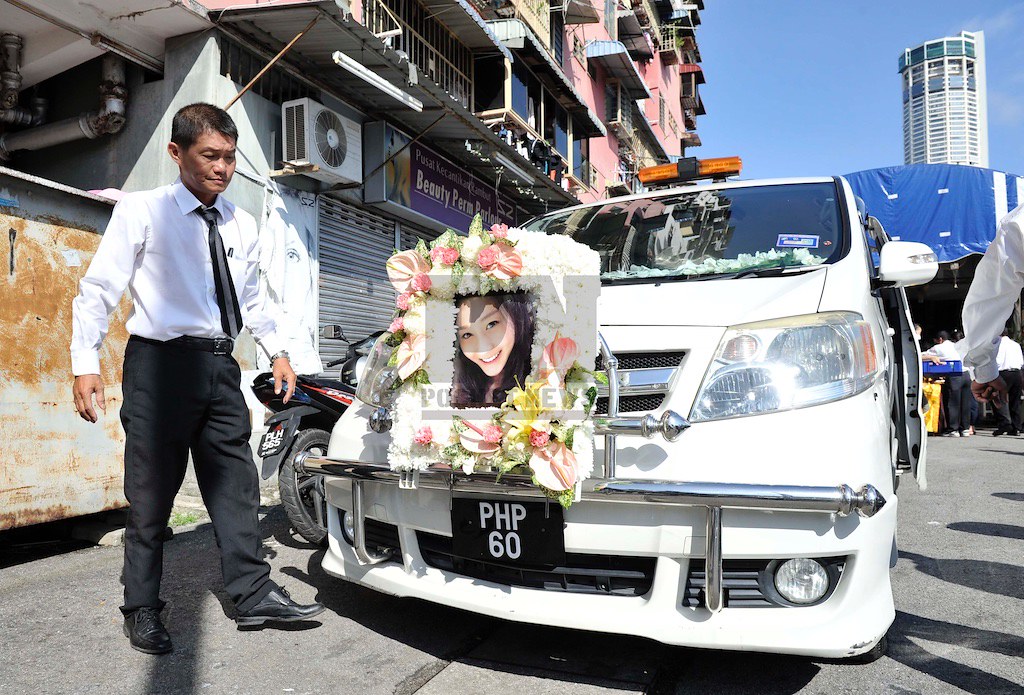